Neither Clean Nor Green…

Did they really ever care about the animals?

We’re still working on the story of Frank McKee and the Julian brothers, and we’re putting together a piece about Wolfson who’s already posted solicitations for renters for a massive commercial development in Beaver Valley even though no plans have been submitted to Concord Township. In the meantime, here’s an update on The Real Woodlawn, an article we published in April.

In the first installment of our Woodlawn expose, we pulled back the curtain and gave you an inside look at how Woodlawn has done business in the past. For those of you who are new to the fight, Woodlawn is the corporation in Wilmington that has been portraying itself for decades as a conservation organization but which in reality is nothing more than a real estate developer. In fact, one of their board members (Richard Julian) owns Eastern States Construction, one of the corporations planning to pave over Beaver Valley. Many of the things we uncovered about Woodlawn were shocking enough -- even to those of us jaded by the sheer magnitude of the greed infusing this tale. But we got another jolt from what additional research revealed. (If you haven’t read the first Woodlawn article, you can check that out here.)

When we were writing the original story, there was one thing that we couldn’t find an answer to: what was Woodlawn’s original motive for creating its wildlife refuge? We weren’t able to find an answer to that question at the Hagley Museum where Woodlawn’s old documents are kept. Did they do it for genuinely benevolent purposes or were there financial considerations involved? Six months ago, we were leaning towards the assumption that a more benevolent board of directors created the wildlife refuge out of a sense of altruism and in the spirit of William Bancroft’s original mission. Now we know that was not the case and it was most likely for tax purposes that they created the refuge. Strangely, this is actually good news. 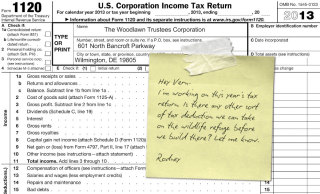 Believe it or not, this is just a cartoon

One of the things we revealed in The Real Woodlawn was that their thirst for tax shelters was unquenchable. They created tax exempt affiliates called Todmorden and Rockford Woodlawn; they masqueraded as a charity for decades until that charade ended after an IRS lawsuit; they engaged in complicated land exchanges with land sellers and buyers to lower their taxes, including one with Dr. Brubaker whose land they promised to protect. And they did these things while portraying themselves in the media as a “benevolent” organization. What’s most important is that they bought most of their land in Beaver Valley and elsewhere when they were a tax exempt charity. Lower tax bills provided them with even more money to buy even more land in Beaver Valley. One way of looking at this is that much of the money used to purchase the lands in Beaver Valley belonged to the public. Local and state governments got less money from Woodlawn from taxes in exchange for the public good Woodlawn seemed to be serving by “protecting” land. Thus, much of the land that Woodlawn now owns rightly belongs in part to the public.

These facts make it all the more outrageous that Vernon Green of Woodlawn has been telling homeowners living near the wildlife refuge that Woodlawn always intended to develop all of their land! At the same time, Woodlawn was saying very different things to the general public about their mission. One look at their website, and the casual observer would think they were a major land trust. Woodlawn preened itself as working for the public good while it was being subsidized by taxpayers -- so that it could one day cash in on the sale of its land. But that’s not the end of it. Woodlawn received other tax subsidies while they hoarded their land in Beaver Valley.

In 1974, a Pennsylvania program called “Clean and Green” (Act 319) was created to encourage landowners to conserve their land by offering property owners significant tax breaks to keep their land in agricultural, open space, or forest use. Importantly, the law was not created to provide tax breaks to developers biding their time while their land became more valuable. Rather, the purpose of Act 319 was to encourage landowners to protect their land permanently. The Act also provided that the public be given access to the land in exchange for these tax breaks.

According to documents we accessed at the Media courthouse, it seems that Woodlawn created its wildlife refuge in the early 70s so that it could reap the tax benefits of Act 319. It was then it seems that they created trails and opened their “wildlife refuge” for public use. Prior to that, they had security guards keeping the public off their land. It’s not known how much money Woodlawn has saved over 40 years from Act 319, but one thing IS known: every single one of their properties in Pennsylvania was entered into the “Clean and Green” program, including Dr. Brubaker’s old arboretum on Beaver Valley Road. 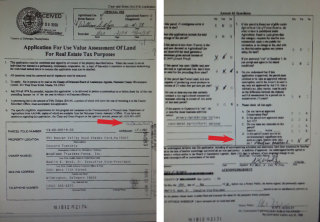 We appologize for the blurry image but the court house doesn't make it easy to copy documents.
This is the document that had to be filed to enter Brubaker's 50 acres into Act 319, the Clean and Green program.
The left arrow identifies the Brubaker property. The right arrow indicates where Woodlawn designated this land to be "Woodlawn Parkland", and has since been receiving tax benefits for it each year.
The Clean and Green Program was  set up to be used as a temporary tax shelter until the owner is ready to develop their land.
Woodlawn has filed one of these for each of their Pennsylvania properties, and there are dozens.

So it would appear that Woodlawn’s motivation to create the wildlife refuge was no different than everything else they’ve done: to lower their tax bill as much as possible on the land they ultimately intended to develop while fooling the public and good people like Merlin Brubaker into believing their “conservation” ruse. Over the course of 40 years, Woodlawn has saved an untold amount of money in taxes by virtue of having designated their land holdings as a wildlife refuge, much of which they were able to purchase in the first place because of their charitable status. Outrageously, instead of pursuing a conservation option for Beaver Valley (which would net them considerable profit), now the Woodlawn board intends to cash out by selling the wildlife refuge to one of its own members!

All of the hundreds of thousands (if not millions) of dollars that Woodlawn never paid in taxes from when they were a charity and all the tax money they never paid after they entered the Act 319 program will essentially be handed over to developers who will make millions from paving the wildlife refuge that thousands of residents want to have protected. True, a small portion of those taxes -- a pittance to McKee and Julian -- will have to be repaid, but the residents of the Brandywine Valley will still beheavily subsidizing this loss of open space. The final insult is that after the developers retreat to their grand estates, the middle class residents of Concord Township will pay even higher school taxes to educate the more than 300 children who will live in the 171 houses in Beaver Valley. They will also have to live with the coming traffic nightmare not only from that huge development, but also from 200,000 sq. ft. big box outlet in the works for Beaver Valley (see picture above of Wolfson's Concord Commons)

The ending to this story is not written yet. Woodlawn may have created the wildlife refuge to avoid paying its fair share in taxes, but now those various public tax subsidies have given the public a legitimate reason to have the refuge conserved. Paradoxically, when Woodlawn created the wildlife refuge to lower its tax bill, it created a public trust. Twenty years from now, when areas surrounding the Brandywine Valley look like suburbs of New York City, those future residents will look back and either have high praise for Woodlawn and its board for saving Beaver Valley, or they will curse them for having contributed so much to the problem. 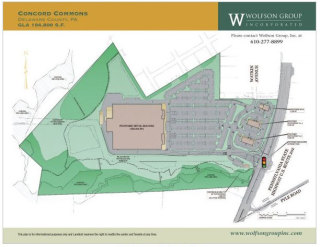 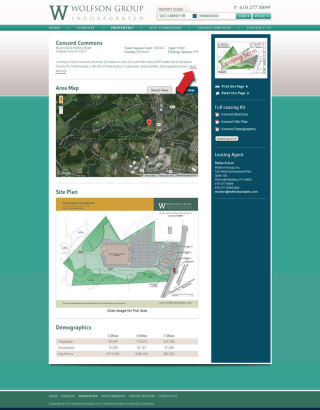 These plans haven’t even been submitted yet, but Wolfson is already soliciting commercial renters for “Concord Commons”!!