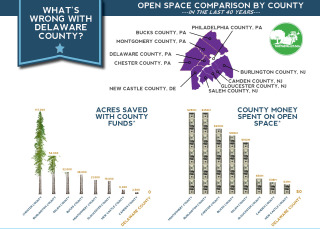 It’s not surprising that outer-ring suburban counties like Bucks, Salem, Gloucester, Chester, and Burlington Counties have saved more open space than other inner-ring counties. These counties lie further afield from Philadelphia, and as awareness of the need to protect open space was gaining traction thirty and forty years ago, they started their open space programs when there was still a great deal of open space available to protect in those counties. In the case of inner ring suburban counties like Delaware, Montgomery, and Camden, we expected to find much less open space protection, and that expectation for the most part proved true. However, Montgomery County surprised us, protecting at least 21,000 acres of land with county bond issues. Camden County’s size and proximity to Philadelphia has certainly affected how much open space there was available to save, but its 2,500 acres of purchased open space is still significant. That leaves Delaware County, alone in the Delaware Valley, as having spent no county money (as far as we could determine) on open space in the last 40 years. Given how little open space Delco has left, this makes absolutely no sense.

It is true that Delaware County Council has worked with third parties to save some land without using county funds. For example, they helped to facilitate, with funds raised by Natural Lands Trust, Middletown Township and others, the purchase of the 46 acre “Mineral Hill” on the outskirts of Media. According to former county council member Christine Fizzano Cannon, “...through our partnership with Natural Lands Trust and other organizations, we are preserving this landmark without expending county tax dollars.” A noble goal in tight economic times, but in the case of Beaver Valley, one of the last large pieces of open space in the county available to protect, and which is used by thousands of outdoor enthusiasts every month, we believe it is high time the county stepped up with some money of its own and joined a consortium of buyers to rescue the Beaver Valley wildlife refuge from The Woodlawn Trustees.

*According to county officials on the planning commission of each county