The Betrayal of Dr. Merlin Brubaker

If history doesn’t matter, then nothing does. 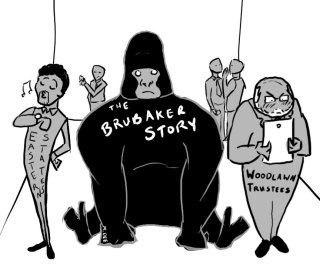 "Brubaker... why does that name sound familiar?"

When it comes right down to it, the fact that this struggle to save a wildlife refuge is even occurring confounds the senses. This is the stuff of Hollywood movies: an estate gets purchased by “Trustees” who promise to preserve the land; the land only gets sold to “trustees” for that reason; the land then becomes part of an already existing wildlife refuge; subsequent renters of the house and barn are strictly required to follow preservation rules because -- it’s a wildlife refuge; “trustees” decide that they don’t want to save the land after all; several different parties -- one, a neighbor; the other, a former tenant -- separately offer the “trustees” millions of dollars to buy the land but are refused; ignoring huge opposition movement, “trustees” plow ahead with plans to break a promise and destroy a huge part of a wildlife refuge. You can’t make this up.

Two words you’ll never hear Woodlawn, Vernon Green, Frank McKee, Richard Julian, or any of the other insiders at Woodlawn say are “Merlin Brubaker.” And there’s good reason. He’s the 800 pound gorilla in the room they’re desperately trying to ignore, that, and the fact that Woodlawn is actually trying to develop their own wildlife refuge. Dr. Brubaker’s old estate, 123 Beaver Valley Road, is actually the address the developers have listed on their plans: it’s the anchor of the “development” even though Dr. Brubaker sold his land to Woodlawn because they told him it would be conserved, forever.

What follows below represents what we were able to uncover about just one of the former property owners of the lands in the Woodlawn wildlife refuge. If you are aware of -- or have access to -- information that reveals the truth about any of the other former landowners who may have been duped by Woodlawn, please contact us.

The Video That Woodlawn, McKee, and Julian Do Not Want You to See.

This short video, recorded by Merlin’s great granddaughter Madeline, features Bob Brubaker discussing his father's decision to sell his estate and arboretum to Woodlawn in 1980. The developers will argue that this video or the documents we have do not constitute proof of anything, and yet, in our legal system, eyewitness testimony is regarded as good enough proof to send someone to death row. We're hoping you're convinced enough by Bob's interview to help us rescue Beaver Valley from death row.

The Purchase: A Place in the Country

Merlin Brubaker was hired as a chemist by DuPont in 1927 and went to work on the team developing Nylon. He later went on to work on the development of Rayon and Teflon, all three of which were huge commercial successes for DuPont. Along the way he received 63 patents and became the assistant director of research for DuPont’s Experimental Station in Wilmington, DE. Dr. Brubaker’s work through the early and middle part of the 20th century helped make DuPont one of the most important companies on the planet.

Looking for a place in the country, he and his wife Clara in 1939 decided to purchase 51 acres at 123 Beaver Valley Road, the site of a former dairy farm. One of the first things Merlin and Clara did was to hire an architect and builder to renovate the very old barn on the property and to build them a house. Over the next decades, Dr. Brubaker and Clara worked tirelessly to transform the estate into an exceptional arboretum which Frank McKee and the Julian brothers now would desecrate. 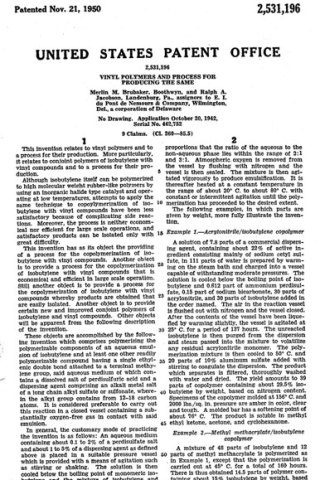 One of Merlin Brubaker's many patents 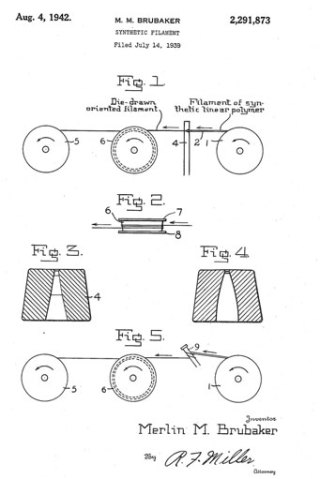 Another patent by Merlin Brubaker 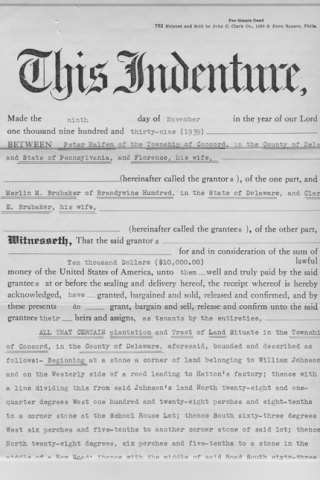 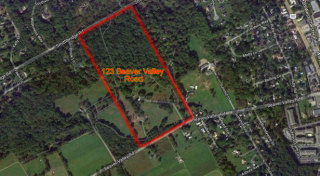 The Transformation: From Dairy Farm to Arboretum

When the Brubakers bought the property at 123 Beaver Valley Road, it had recently been a dairy farm -- one which still showed the scars of that intensive form of land use. Clara and Merlin set to work right away transforming the land and healing its wounds. To help plan his efforts, he drew a map showing where everything would go in the finished arboretum, and, conservation being a big part of who he was, his desire to preserve the old barn was noted on the map. Over the decades, he planted an orchard, peppered the land with rare and valuable trees and shrubs, cultivated wild flower meadows, and became an expert in the art of grafting. Dr. Brubaker created varieties of trees that exist nowhere else, built and filled two greenhouses with hundreds of exceptional orchids, and groomed his estate into the show piece it was when he sold it to Woodlawn.

He and Clara would rarely go on vacation as most of their free time was spent working around their arboretum at 123 Beaver Valley Road. Instead, they would entertain out-of-state orchid and tree aficionados almost every weekend. Dr. Brubaker was also one of the most prolific donors of orchids to Longwood Gardens ever, donating well over 100 prize-winning orchids over the years. He had dozens of articles published in a variety of orchid periodicals and was seen as a top expert by other orchid growers. To honor Dr. Brubaker's achievements and legacy, we contacted the U.S. Board on Geographic Names to get an exceptional-quality stream on his old property named after him: "Brubaker Run." There has been no movement on this for six months because, according to the U.S.B.G.N., Woodlawn will not give its approval, most likely because Richard Julian's and Frank McKee’s bulldozers are waiting to roll over Dr. Brubaker’s arboretum without the slightest regard for this history or this great man. 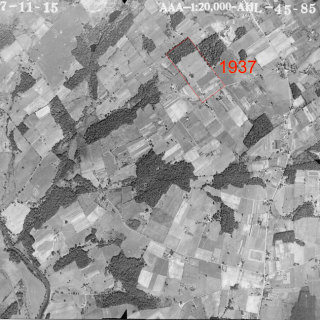 The land in 1937 before Dr. Brubaker took posession. 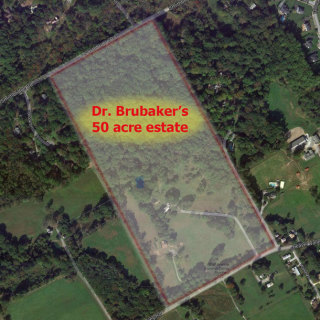 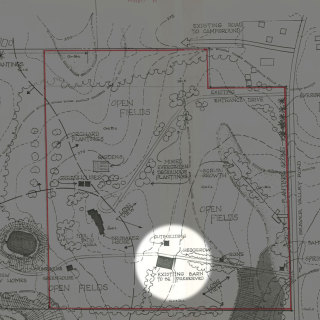 "Existing barn to be preserved"

The Promise: Conserving The Arboretum

From the 60s to 1980, The Brubakers were contacted repeatedly by developers wishing to purchase and subdivide the land. Letting his land get carved up for development was always out of the question, so as Dr. Brubaker neared his 80s, he began to look for ways to protect his arboretum permanently. The solution seemed to lie no further than across Beaver Valley Road where hundreds of Woodlawn wildlife refuge signs stood sentry over the landscape. He decided to contact Woodlawn to see if they would add his land to their wildlife refuge.

A dialogue began between Dr. Brubaker and Stephen Clark, president of Woodlawn, that lasted two years, finally culminating in an agreement in 1981 with Woodlawn closing the deal to purchase the estate and conserve it. Dr. Brubaker continued to live on his estate for about 5 years, renting the property back from Woodlawn. Even after he moved into a retirement community in the mid 80s, Dr. Brubaker continued to return several days a week to work in his old greenhouses and around the arboretum.

One of the things we heard repeatedly as we researched this story was that Dr. Brubaker was assured that Woodlawn would maintain his arboretum. Bru was thrilled when, within the year of purchase, Woodlawn installed dozens of wildlife refuge signs around his land (marked in the video), and there they have remained for over 30 years, that is, until Richard Julian’s, Frank McKee’s and Rodney Lambert’s “earth movers” run them over. Sadly, Brubaker trusted Stephen Clark and Woodlawn and never insisted on an easement that would have made it impossible to “develop” his land. 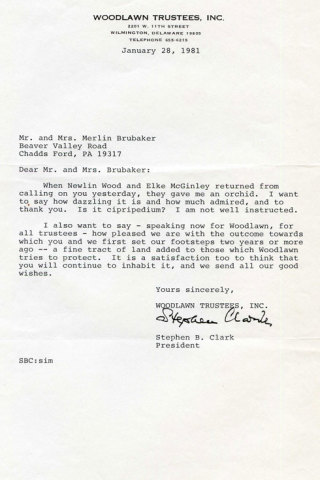 Letter from Woodlawn to Brubaker 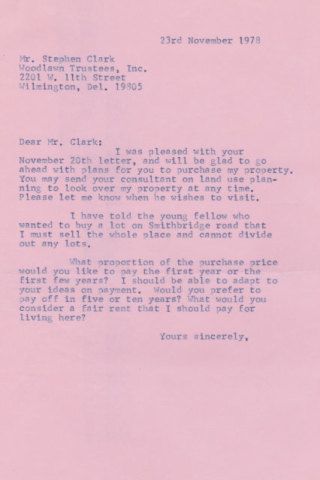 Carbon copy of a letter Brubaker sent to Woodlawn 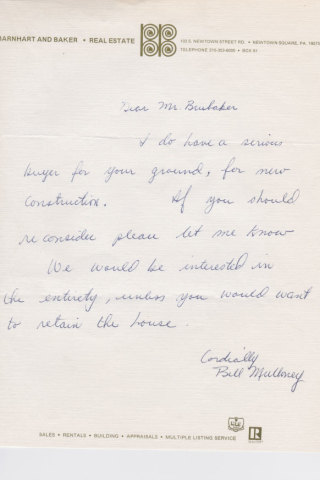 Letter to Brubaker from a real estate company 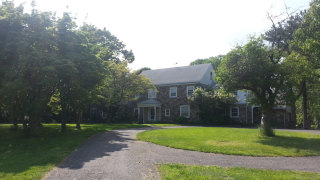 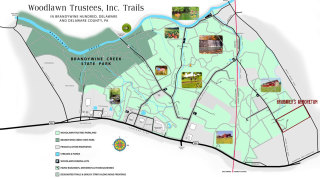 The Brubaker property on the Woodlawn trail map.

There were some early warning signs that Woodlawn may have not been dealing honestly. As the discussion between Dr. Brubaker and Woodlawn continued, he got a letter from them in 1979 asking if he would participate in a tax sheltering tactic whereby a developer planning to build on another piece of Woodlawn property would buy Brubaker’s land and then exchange it with Woodlawn, thus lowering in large part their tax bill. There was nothing illegal about this sort of arrangement, but it paints a picture of Woodlawn they don’t exactly hang on their wall.

Dr. Brubaker by that point had become friends with Stephen Clark, so he never suspected that Woodlawn was trying to dupe him and, from all available information, it seems that Clark was sincere in his promise to protect the estate. Yet here we are thirty-three years later, despite all of Woodlawn’s assurances that they protect open space, opposing a new set of disgusting development plans from Frank McKee and Richard Julian that would completely entomb Dr. Brubaker’s land, demolish the 250 year old barn he restored, and pave over the remainder of the Concord Township portion of the wildlife refuge. 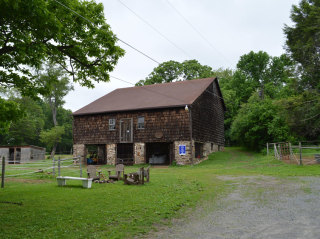 The Brubaker barn was built in 1772 - that's three years before Paul Revere's ride. 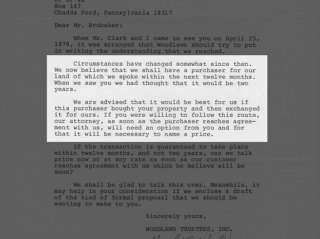 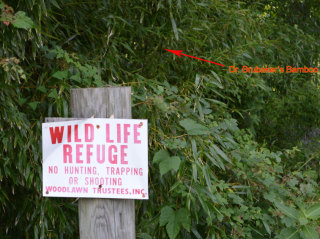 Wildlife refuge sign on the Brubaker property, installed by Woodlawn

The Plea: There are Some Things Worth More Than Money

The people at McKee, Eastern States, the Woodlawn Trustees are humans (we hope), not cyborgs, and as such, they might be made to see reason. We are quite certain there are many good, caring people in those organizations who may have a say in what happens to the wildlife refuge. We are asking them to speak up and oppose this destruction. Most likely it’s only a few people with dubious motives driving this push to dishonor Dr. Brubaker’s and William Bancroft’s legacies. Having read many of the letters that Bancroft wrote throughout his lifetime, we are convinced he would be appalled at what’s going on. It’s true he cared about affordable housing for the workers of Wilmington, but he makes it acutely clear that protecting park lands was his number one priority. By selling their land to a conservancy or a consortium of interested parties, Woodlawn would reap millions of dollars for their affordable housing efforts in Wilmington AND protect open space. To rational people, this seems like a self evident path to take.

We have all heard that “you can’t fight City Hall,” or “you can’t undo a done deal,” or “you can’t oppose a large corporation.” Here’s something else we’ve heard. One person wrote a book that eventually led to DDT being banned in this country. DDT was just a few years away from causing the extinction of hundreds of birds, one of which was our national symbol: the bald eagle. Americans, too, were being poisoned on an epic scale, and then a woman from Springdale, Pennsylvania wrote a book called Silent Spring and everything changed. Rachel Carson's book sparked the modern environmental movement. Of course, it was violently opposed by Monsanto and other corporations, who said things about her which sound a lot like the things that are being said about you: “you’re an outsider,” “you don’t understand the issues,” “you’re standing in the way of progress,” “you’re going to cause tax increases and lose people their jobs.” These are the things that powerful people say when they want to stifle your voice. If one woman can do something as powerful as getting DDT banned, just think what 20,000 of us could do. 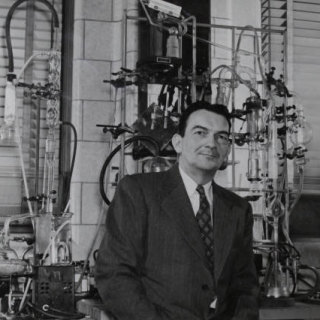 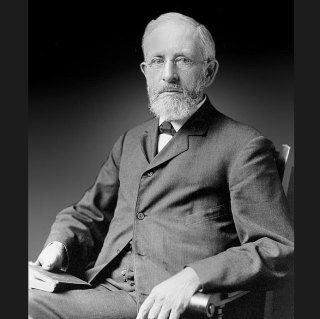 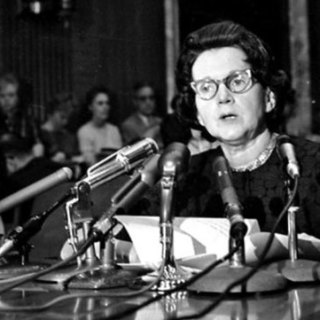