We did it! We just got word from the Brandywine Conservancy that the funding has been secured. We raised $8M just in the nick of time and now 240 acres in Concord Twp are on their way to being saved (update: the parcel is now 270 acres).  As with any large complicated transactions there are a number of contingencies and contractual details to work out that we’ll have smoothed over next week.  We wanted to let you know as soon as possible because you’re the ones who were instrumental in making this happen. We received almost 2,000 individual donations, making it one of the largest crowdfunded movements our community has ever seen.  All of your passion, tireless work, and dedication made it happen. Come help us celebrate at the bonfire this Saturday!

What next? Below are some FAQ to help you understand what exactly happened and what's next.

What is the status of the funding?
As announced, the Brandywine Conservancy and The Conservation Fund have received commitments of $8 million, just barely. Not all of the commitments have yet been funded, and the Conservancy is contacting those who have committed to arrange for funding. While we expect everyone to fund, it is always possible that someone won’t. Thus, until the last commitment has been funded, we cannot say that the full amount has been raised and paid.

What happens if someone doesn’t fund?
The Conservation Fund is making arrangements to cover any shortfall.

What happens if more than enough money is received?
No one expects that there will be any substantial amount in excess of $8 million received. If there is a slight excess, that excess will be used to pay a portion of the direct costs of the transaction (i.e., legal, survey, environmental reports, remediation, etc.). Those direct costs are substantial.

When is the funding deadline?
All funds received by 5:00 p.m. on Friday and all amounts received at the bonfire on Saturday will be transmitted to the Conservation Fund on Monday, May 1. Those amounts will be used to cover any shortfall and direct costs of the transaction.

Will my money be used to pay expenses?
No.  All money contributed by the public will be used to purchase the land.  As referred to above, if there is an excess, one of the larger donors has agreed that a portion of their donation may be used to fund expenses.

When we will know what happens?
The Conservation Fund and the Brandywine Conservancy will issue a press release when the transaction closes. We are hopeful that will occur very early next week.

Who will own the properties when the transaction closes?
The properties will be held by the Conservation Fund. It is anticipated that they will most likely be added to the National Park, but Yogi Berra’s cliché (it’s never over ‘til it’s over) is as appropriate to that as it is to the fundraising and closing. In all events, the properties will be protected against development in the future.

What will the funds raised during this Saturday’s bonfire be used for?
When the dust settles, if there are any excess funds they will be used to pay additional costs incurred.

How many donations did we have?
We had almost 2,000 donations from the community across a diverse range of giving levels. We couldn’t have done it without you!

How many acres were preserved?
The purchase was actually for 270 acres - not 240. While the Vineyard Commons tract was 240 acres, the purchase included the 30 acre Penns Woods Winery property, which Woodlawn owned.

What’s next?
Well, we breathe a sigh of relief and start planning the celebration. Stay tuned for details about a celebration event. Details are yet to be determined.

Up next on the radar is the “Concord Ventures” proposal (below in red). Read more about that one here. Additionally, there are still 321 acres of unprotected land in Delaware. 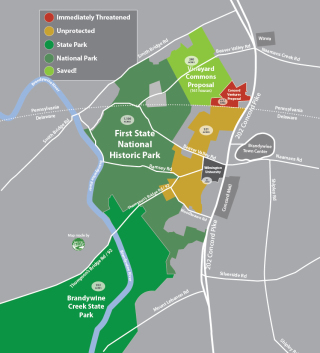 Get a Bumper Sticker

Save The Valley is Powered by

A big thanks to Trolley Web for giving their tireless support to Save The Valley. They've been lending the use of their amazing website builder, called "Leiout". Leiout allows us to grow our facebook following while easily keeping our website up to date through a drag and drop interface. We highly recommend Trolley Web's services to anyone looking for a professional website, especially to those who want to grow their facebook following.

2016 Save The Valley. All rights reserved.
This website was produced by Trolley Web